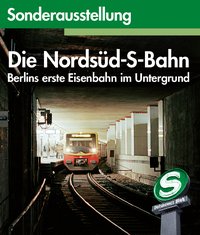 Last day of the North-South S-Bahn exhibition
Once again, on the last day, around 120 guests visit the exhibition, which is being shown in cooperation between the Berlin S-Bahn Museum and Berlin Underworlds in a former underground toilet facility from the 1930s, which the Association has converted into exhibition rooms. The exhibition on the north-south S-Bahn thus registers 2,356 visitors in 2019, and next year the cooperation will be continued with a new exhibition.

“30 years since the fall of the Wall – 30 years of Apparatschik” – commemoration with concert
Exactly 30 years ago, on November 9th, 1989, the Bornholmer Strasse border crossing was opened completely unexpectedly. In a panel discussion, contemporary witnesses Martin Schaal, Olaf Opitz and Dietmar Arnold recall this great moment in human history, which has given most of our lives an unexpected direction. With around 150 invited guests, we remember the historic event and raise a glass to it. Matthias Binner, Anja Fliess and Caro Kunde provide the musical backdrop with songs about Berlin history and the Berlin Wall. The grand finale is a concert by “APPARATSCHIK”, founded in 1989, with their famous Taiga Tunes & Soviet Grooves.

“Escape Tunnel” audio trail now part of the berlinHistory.app
As of today, the “Escape Tunnel audio trail” by Kai-Uwe Kohlschmidt is part of the free berlinHistory.app. In collaboration with Kai-Uwe Kohlschmidt, Berlin Underworlds presented the “Escape Tunnel” audio trail and the audio book of the same name for the first time in 2012 on the anniversary of the fall of the Wall. This is a fascinating and exciting journey through time in five acts. With the app, the user of the audio trail goes on a journey into the past. The audio lasts around 2 hours and covers a distance of about 4.7 kilometres. The audio trail and the audio book were funded by the Foundation for the Reappraisal of the SED dictatorship.

Opening of the visitors’ tunnel
Together with Michael Müller, the governing mayor of Berlin, Ulrich Pfeifer, escape agent (involved in the betrayed tunnel 71), and Prof. Dr. Axel Klausmeier, director of the Berlin Wall Foundation, the Association’s chairman, Dietmar Arnold, opens the visitor tunnel, which intersects with a historic escape tunnel from 1970/71. This is the first time that an authentic tunnel has been accessible to the public.

From November 10th, visitors will be able to look through two “archaeological windows” into the gloomy silence of the “betrayed” tunnel at the spot where the new tunnel meets the historic one.
Access to the 2.05-metre-high and around 30-metre-long visitor tunnel, for which prefabricated reinforced concrete segments were used, takes place at a depth of around seven and a half metres in the historic cellar of the former Oswald-Berliner-Brewery at Brunnenstrasse 143.

Since September 2017, Berlin Underworlds has moved around 189 cubic metres (334 tons) of marl soil to build a tunnel for guests on Tour M - Underground to Freedom, leading to an original escape tunnel from 1970/71. Numerous Association members have volunteered hundreds of hours to carry out the project. In addition, the Association has raised well over 300,000 euros for building materials and necessary permits.

At the historical site, you can experience the enormous efforts made by the escape agents after the Wall was built to help those who wanted to escape to freedom. Bernauer Strasse, on the border between the districts of Gesundbrunnen and Mitte, was a focal point for tunnel escapes from East to West Berlin.
Over a distance of only 350 metres, the border barriers here were tunnelled under seven times. The area stands not only for great joy when an escape was successful, but also for infinite suffering when, for example, betrayal thwarted the plans - as happened in 1971 with the tunnel that the Association has now “dug”.

Dietmar Arnold (Chairman of Berlin Underworlds):
“The visitors’ tunnel is a unique addition to our information offering on the ‘wall breakthroughs’. We are now the only ones who can present their guests with a real escape tunnel.”

Michael Müller (governing Mayor of Berlin):
“In the new viewing tunnel, you can experience a tragic piece of Berlin’s contemporary history up close. The risky commitment and courage of the men and women who tried to bring fellow human beings to freedom and thus resisted the GDR regime can be authentically experienced. We would like to thank the Association and all those involved in this project. This tunnel, which is being opened 30 years after the fall of the Berlin Wall, reminds us of a dramatic time in the history of the ‘City of Freedom’.”

Prof. Dr Axel Klausmeier (Director of the Berlin Wall Foundation):
“It is impressive that this Berlin Underworlds project has once again been brought to a successful conclusion through enormous civic commitment. As a neighbour of Bernauer Strasse, I congratulate everyone involved. The view of the remains of the former escape tunnel will give visitors an impression of the conditions under which the escape helpers once worked to get people out. And also, of what the refugees took upon themselves to escape the SED state.”

The musical backdrop is provided by the group “Trio Scho” as well as Caro Kunde with her escape tunnel song “Frei”, which each of the 150 journalists and guests receive on CD. 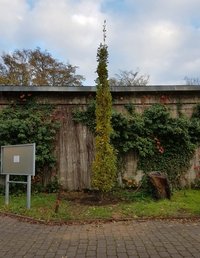 Tree donation at the OP Bunker
In August 2019 - completely unexpectedly and without the impact of a storm - a large branch broke off a weeping willow tree at the Teichstrasse OP bunker. As a replacement, Berlin Underworlds donates two trees of the Quercus robur variety “Fastigiata Koster” (English oak), which will be planted by Clemens Jahn Gartenbau on this day. The Association also takes over sponsorship of the new plantings for 10 years.

Two new light boxes at the Berlin Wall Documentation Centre
The series of images along the former border strip at the Berlin Wall Documentation Centre will be expanded by two motifs. Berlin Underworlds is having two light boxes measuring 1.90 x 2.10 metres installed on the gable wall of the house at Brunnenstrasse 141, showing the historic escape tunnel from 1970/71 and the newly built visitor tunnel that intersects with it.

Exhibition and information stand in Gustav-Heinemann-Secondary School
AG Modellbau participates for the second time in the historical model railway exhibition at Gustav-Heinemann-Secondary School in Marienfelde. On the occasion of the opening of the last S-Bahn station in the Berlin North-South tunnel in October 1939, the working group with the model of Anhalter Bahnhof, as well as an information booth, will be on site.

Monument Open Day
This year, Berlin Underworlds also takes part in the Monument Open Day. Tours will be offered in 3 three separate locations.
In addition to the Reich Air-raid Warfare School, the Heckeshorn high-rise bunker and the Friesenstrasse air-raid sample tunnel system, the cellars of a former slaughterhouse, the last remaining relic of the former stock cattle market and slaughterhouse, can also be visited again.

Information board unveiled
On Wittenauer (formerly Lübarser) Strasse in the district of Reinickendorf, an information board on the two high-rise bunkers there was presented to the public on the 80th anniversary of the beginning of the Second World War. The historical research (in consultation with Klaus Topel), realisation and implementation of the information board was carried out by the Berlin Underworlds Association.
The bunkers are two of a total five high-rise bunkers of construction type M 500 still extant in Berlin. Both facilities were built, with the use of forced labourers, as part of the “Bunker Construction Programme for the Capital of the Reich” in 1941/44 to protect the civilian population in the surrounding area. Further information can be found here.

New listening station unveiled
As part of the Long Night of the Museums, during which around 1,850 guests visited the “Myth of Germania” and north-south suburban railway exhibitions, a new listening station was inaugurated in the “Myth of Germania - Vision and Crime” permanent exhibition to mark the 80th anniversary of the outbreak of the Second World War. It deals with the artistic examination of the architectural NS relics, which continues to this day. This is how the Berlin singer-songwriter Matthias Binner sings about “Devil’s Mountain” (Teufelsberg) made of war wreckage, under which, the remains of the Faculty of Defence Technology can be found. It was here that Binner learned to sleigh as a small boy. The spatial overlapping of warlike history and childlike moments of happiness inspired him to write the song “Die Ruinen Germanias” (The Ruins of Germania) about Berlin’s past and present, which you can also listen to here on YouTube. 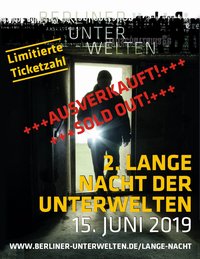 Construction progress on the visitor tunnel - horizontal section completed
On February 7th, the last of a total 105 frames made of precast concrete elements was set, thus completing the horizontal section of the visitor tunnel.
Each frame consists of four parts and weighs a total of 750 kg. The visitor tunnel is now 27.30 metres long. For this purpose, 57 containers with a capacity of three cubic metres each were filled with debris and carted away.
In the coming weeks, the vertical shaft will be constructed, which will later allow exit from a depth of 4.30 metres.
After its completion, the visitor tunnel will be accessible as part of our Tour M - “Underground to Freedom”.
It intersects with a former escape tunnel from 1970/71, into which visitors can see through a window. This is the first time a historical escape tunnel has been made publicly visible.

Review - The year 2018 in figures
In 2018, we had around 333,000 visitors on approximately 15,550 guided tours and in our exhibitions. Our educational seminars are almost fully booked again in 2018 with around 700 participants. Our Facebook main page lists 16,670 “likes” at the turn of the year. Our website was accessed around 2.35 million times in 2018. At the turn of the year, the Association has 506 members.
We would like to thank all guests, partners, friends and sponsors who visited, recommended and supported us last year. We wish you a healthy, successful and peaceful 2019.