On the facade of Brunnenstrasse 141, a plaque tells of the history of the site on which the building is located. The Berlin Underworlds Association has turned various cellar rooms under Brunnenstrasse 141 – 143 into exhibition spaces and constructed a visitors’ tunnel, which intersects with a historic escape tunnel. Our seminar rooms are on the ground floor of the building.
The information on the plaque is also available in English via a QR code. 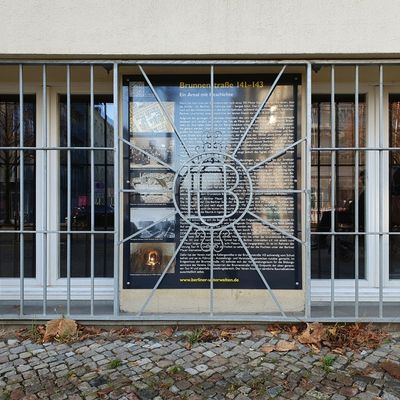 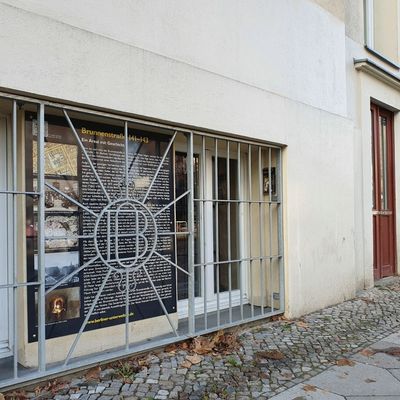 On Wittenauer (formerly Lübarser) Strasse in the district of Reinickendorf, two of a total five extant M 500 high-rise bunkers in Berlin still stand. Also employing forced labour, both facilities were constructed between 1941 and 1944 within the framework of the “Bunker Construction Programme for the Capital of the Reich” to protect the civilian population in the surrounding area. On the occasion of the 80th anniversary of the outbreak of the Second World War on September 1st, 1939, the idea was born in the Reinickendorf district office to provide a display panel on the history of the two bunkers, which are now under monument protection. The historical research (in consultation with Klaus Topel), realisation and construction of the information panel was taken over by Berlin Underworlds. The information is also available in English via a QR-Code.
In connection with this, a further information panel will be erected at the Operation Bunker on Teichstrasse.
For the F2 flat bunker still nearby, efforts to have it preserved as a historical monument are probably too late, because at the beginning of August 2019 the building was, at the very least, severely damaged by demolition work. 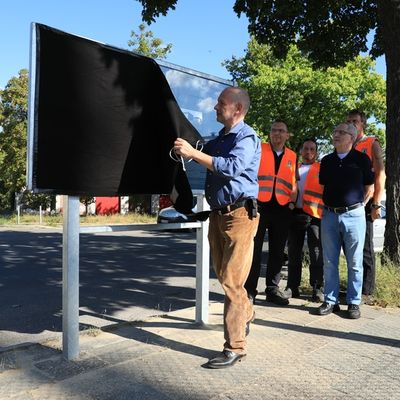 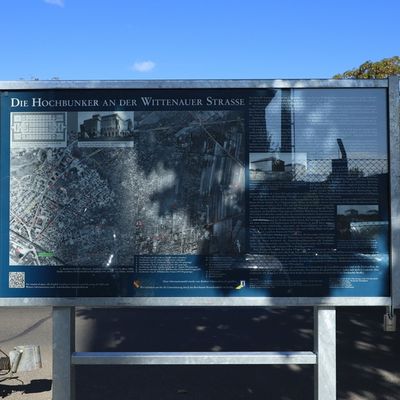 Information Panel “Archaeological Window to the Church of the Ascension in Humboldthain” and “The End of the War in Gesundbrunnen, 1945”

On the afternoon of May 2nd, 1945, the Second World War ended for Berlin with the cessation of the last fighting in the Humboldthain Park and flak bunker area. Unconditional surrender took place on May 8th in Berlin-Karlshorst.
On the occasion of the anniversary, Berlin Underworlds and the Humboldthain protestant church congregation held a memorial service in the Church of the Ascension, which was rebuilt after the war. Afterwards, at the historical site of the former church on Brunnenstrasse, an information and commemorative panel on the former church and the end of the war in Gesundbrunnen in 1945, as well as an “archaeological window”, which exposes parts of the foundations of the old church tower, was handed over to the public. Among others, the President of the House of Parliament of Berlin, Ralf Wieland, the State Archaeologist of Berlin, Prof. Dr. Matthias Wemhoff, as well as the District Mayor of Mitte, Christian Hanke, took part in the event.
The information panel and the “archaeological window” were funded by Berlin Underworlds.
The Church of the Ascension was located opposite the southern entrance building in Gesundbrunnen subway station, in the north-eastern section of Humboldthain Park, and was built between 1890 and 1893 according to designs by architect, August Orth.
The Church, with its yellow brick and terracotta Neo-Romanesque rounded arches, was severely damaged during the last days of the Second World War and the ruins were blown up in 1949.

Erected on: May 2nd, 2015
Location: Humboldthain Park, on Brunnenstrasse opposite building number 105, 13355 Berlin 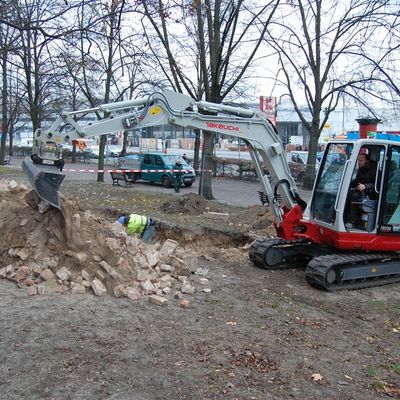 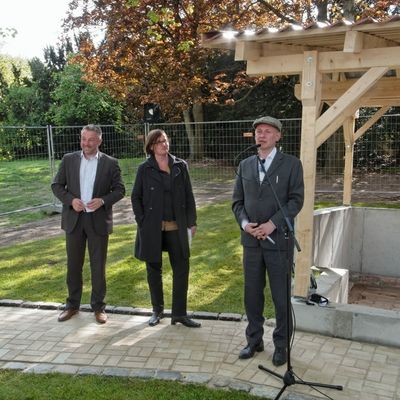 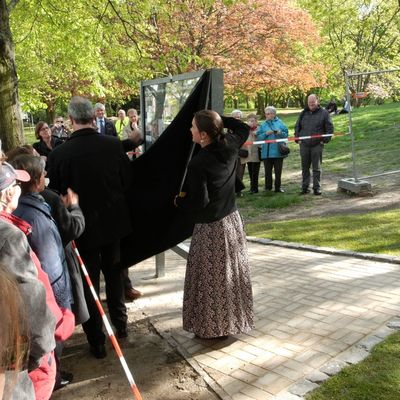 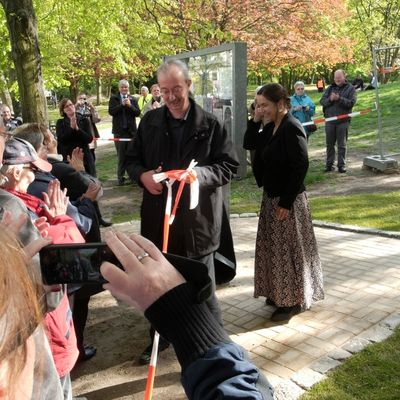 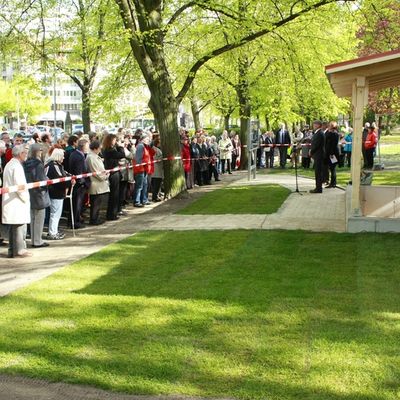 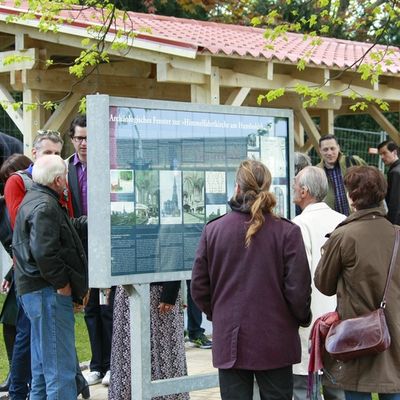 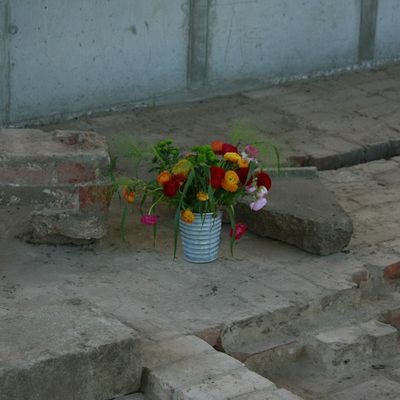 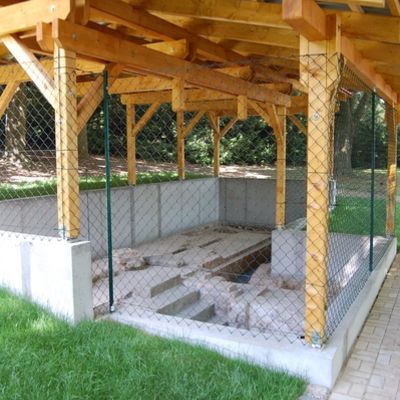 Information and Commemorative "The betrayed escape tunnel between Zehlendorf and Kleinmachnow"

The betrayed escape tunnel between Zehlendorf and Kleinmachnow and the riddle of the unknown “Stasi hero”
At 12.30 on November 14th, 2012, contemporary witnesses Harry Seidel and Boris Franzke unveiled the information and commemorative panel about the failed escape tunnel from Zehlendorf to Kleinmachnow in the presence of around 50 guests. Exactly 50 years before, on November 14th, 1962, escape helpers opened the tunnel that had been dug from Neuruppiner Strasse 157 in Kleinmachnow in the GDR zone. However, the tunnel was betrayed to the Stasi and Harry Seidel was arrested. Four more escape helpers waiting in the tunnel, one of whom was Boris Franzke, the main initiator, were very lucky. A booby trap by GDR State Security didn’t ignite as a Stasi employee, who remains unknown to this day, severed the ignition cable. The Berliner Morgenpost and The World on Sunday (die Welt am Sonntag) reported on the background to the events and the erection of the panel. 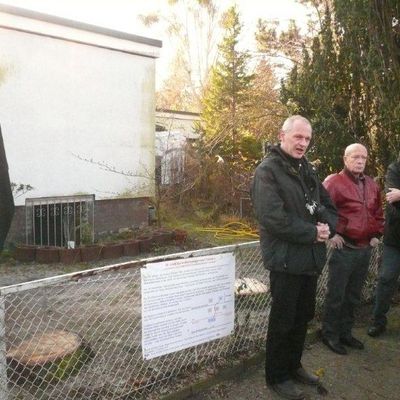 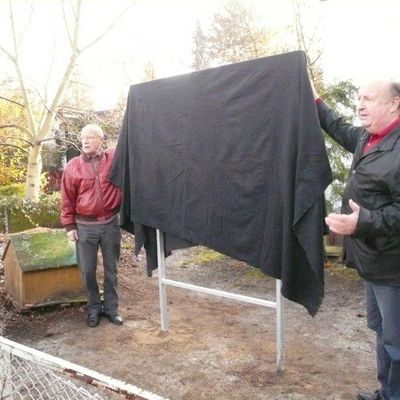 There are two hills in Volkspark Friedrichshain. Under their greenery, in addition to World War Two rubble from the severely damaged district, they conceal the remains of the two flak towers built in 1941. The garrisons, which included many young anti-aircraft warfare helpers, were to locate and shoot down enemy planes. At the same time, the towers were protective bunkers for the area’s civil population. In 1946, both flak towers were blown up by Soviet sappers. By 1950, the ruins were covered with two million cubic metres of rubble, creating the rubble mountains. The panel explains the history with text and images.

Erected on: August 31st, 2012
Location: Volkspark Friedrichshain, in front of the lake opposite Café Schönbrunn, 10407/10249 Berlin

On November 23rd, 2011, in cooperation with the State Representative of Hessen, State Minister Michael Boddenberg, and the Chairman of the Association, Dietmar Arnold, 18 panels were presented, depicting documentary photos of the GDR border troops from 1988. The photos show the death strip wasteland between Potsdamer Platz and the Reichstag. The photography exhibition is located on Ebertstrasse, on the corner of the Ministerial Gardens on the grounds of the State Representation. The photographs were secured by Hagen Koch who, in 1990, was appointed “Deputy of the GDR for the Demolition of the Berlin Wall” and later founded the “Berlin Wall Archive”. By 2008/2009, these photos could already be seen on the observation deck of the Berlin Underworlds “Myth of Germania” exhibition pavilion (near the “Memorial to the Murdered Jews of Europe).

Erected on: November 23rd, 2011
Location: Corner of Ebertstrasse/Ministergärten (Ministerial Gardens), 10117 Berlin (on the grounds of the State Representation of Hessen) 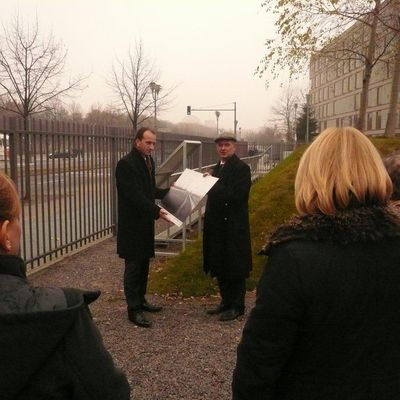 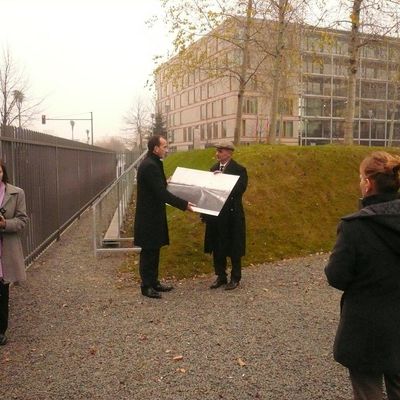 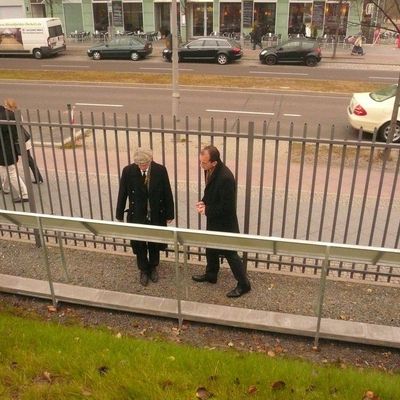 At 10.30 a.m. on August 12th, 2009, in the presence of Eva Högl (member of the Bundestag) and Maria Nooke (Berlin Wall Memorial), Vice President of the Bundestag, Wolfgang Thierse, and contemporary witness, Dieter Hötger, unveiled the information panel and commemorative plaque on the failed escape tunnel under Sebastianstrasse between Mitte and Kreuzberg. On June 28th, 1962, Siegfried Noffke and Dieter Hötger – both unarmed – were caught up in an ambush by GDR State Security in the basement of the house in East Berlin as a result of a betrayal. Siegfried Noffke was shot dead and Dieter Hötger seriously injured. With this third information and commemorative plaque (also written in German-English), the Association dedicated itself for the first time to the topics of “escape tunnels” and the “Berlin Wall”. The ZDF Heute Journal reported on the unveiling of the plaque. 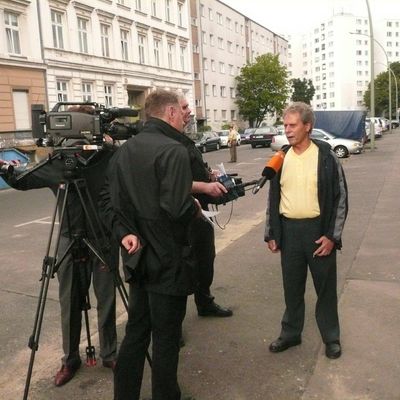 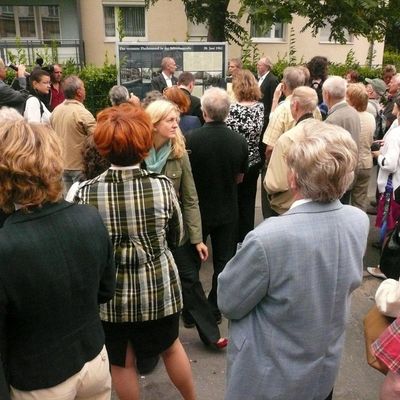 On August 31st, 2007, at the suggestion of the SPD-Bellevue (Mitte) and supported by a donation from the State Minister for Finance, Peer Steinbrück, another two-sided information panel on the moving history of the Kroll Opera was unveiled. At the historic location facing the Reichstag, in cooperation with the District Administration of Mitte and the Berlin-Mitte Commemorative Plaque Commission, the exhibition of this long overdue bilingual information panel was realised, on which the ambivalent development of the location is chronologically traced. On March 27th, 1933, the so-called “Enabling Act” was passed at the Kroll Opera, and thus began the 12-year reign of terror of the National Socialist regime. The ruins of the Kroll Opera were cleared at the end of the 1950s and the grounds were annexed by Tiergarten. Between 1961 and 1963, on this spot next to the Berlin Wall, sculptors from all over the world used their sculptures to protest against the Berlin Wall and the Iron Curtain. For a long time, this remained the only protest of this kind.

Since August 5th, 2011, a sculpture by Ben Wagin has complemented the ensemble. It is intended to commemorate both the fall of the Wall and the people who died at the Wall. In addition, another information panel explains the historical context of the ensemble of sculptures and establishes the reference to the Parliament of Trees. The Berlin Underworlds information panel received a new surround. 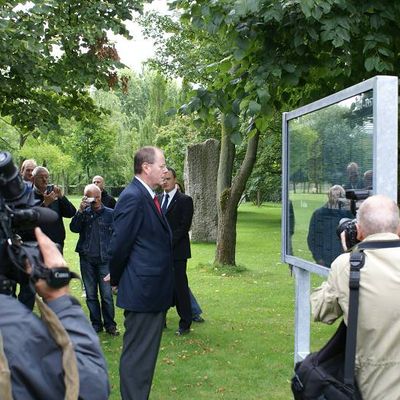 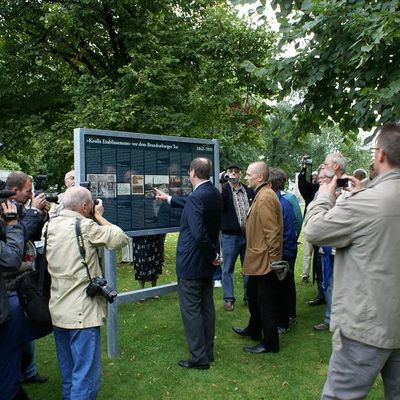 At 8.00 a.m. on June 8th, 2006, a bilingual information panel (German / English) on the “Führerbunker” was handed over to the public in its original location. It gives visitors with an interest in history from all over the world the opportunity to locate this significant, albeit historically dark, site. A visualisation of the area of the former “Führerbunker” is intended to counteract the formation of myths and nostalgic glorification.

In addition, it was the first time that it was possible to mark the point at which - in relation to Europe - the Second World War, with almost 60 million deaths, came to a virtual end. With Hitler’s suicide in the bunker on April 30th, 1945, German officers were released from their oath of allegiance. Two days later, the surrender of the “Capital of the Reich” followed, and then a week later the unconditional surrender of the German Reich.

With a few exceptions, the domestic and foreign media, including the major international news agencies, reacted very positively to the Association’s involvement. 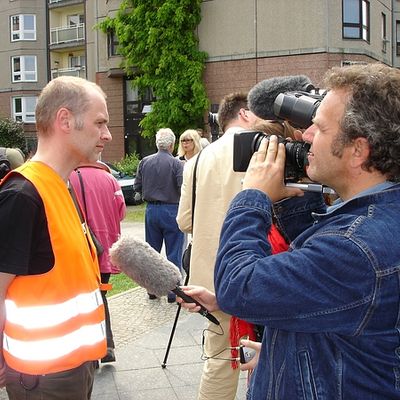